Career geophysicist with over 35 years of training, research and work experience in applied geophysics and environmental studies of geothermal fields.

Other University and National Responsibilities

Between 2012 and 2018 I was the Executive Officer of the Geothermal Association of Kenya. My responsibilities were management of the Association in accordance with its bylaws and, in conjunction with the Board of Directors, overseeing the Association’s long and short term plans in accordance with its strategy.
I have been a team member of organizing committees for local and international conferences and seminars, namely, KenGen Technical Seminar, KenGen G2G Technical Seminar and Africa Rift Geothermal Facility Conference (ARGeo).
KenGen in conjunction with the United Nations University-GTP and the Geothermal Development Company has run an annual Short Course on exploration for geothermal resources since the year 2005. As a Chief Geothermal Training Officer I was either the chairperson or the secretary of the organizing committee 2005 and 2012.

Other Academic And Professional Achievements

I have participated and presented papers in numerous conferences and workshops. These have included:

Was honoured as the best PhD student in 2003 at the University of Texas, El Paso. 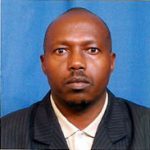